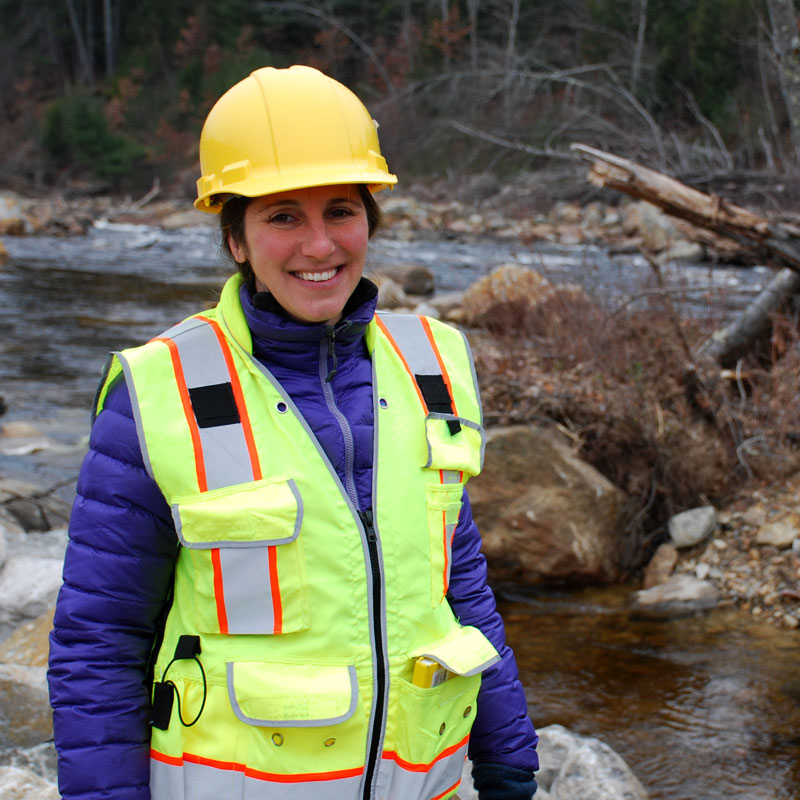 Sarah grew up in the small town of Barre, “smack dab in the middle of Massachusetts and at least thirty minutes from any highway,” Sarah says. Prior to joining the Inter-Fluve team in 2017 to work as a project manager and water resources engineer, Sarah worked for the USGS in the National Stream Quality Accounting Network Program where she focused on water quality monitoring for the nation’s largest rivers (she says the Rio Grande was interesting, but challenging, due to the unfortunate lack of water), and later a large transportation design company where she performed watershed studies, dam removals, and stormwater engineering. (She also parles en francais, having spent five summers in France between undergrad and grad school).

Sarah is passionate about working on projects that “return balance” between humans and wildlife. “I want to help restore special places that have been impacted by a legacy of industrial impacts to our land and water,” Sarah says. One of the projects Sarah has most enjoyed working on­—and that has been a cornerstone policy change for returning balance between humans and wildlife—was contributing to Massachusetts’s “Design of Bridges and Culverts for Wildlife Passage at Freshwater Streams” for Massachusetts Department of Transportation. “It’s crazy how we prioritize people’s movements so that you can drive a car from Alaska to Key West, Florida, yet all along the way the networks for fish, plants, and wildlife are compromised,” explains Sarah. The 2010 guidelines were a huge leap for the state because they explicitly defined the responsibility of the state transportation agency to incorporate invertebrates such as crayfish and insects, fish such as brook trout and eels, amphibians such as spring salamanders, reptiles such as wood turtles, and mammals such as muskrats and otters—into the design of stream crossings.

Sarah’s work at Inter-Fluve is ever changing, ranging from a rip-rap project in Epsom, New Hampshire, to a cranberry bog restoration project on the Coonamsett River in Falmouth, Massachusetts, to a habitat restoration project in Toronto, Canada.  Her work is also rife with the unexpected. “My first month out in the field, I came face to face with a moose!” Sarah exclaims. Out of the office, you’ll likely find Sarah seeking solitude on her bike, hiking with her son, or on a lucky weekend, stopping to watch the tides change at Schoodic Point in Acadia National Park.

“I want to help restore special places that have been impacted by a legacy of industrial impacts to our land and water.”